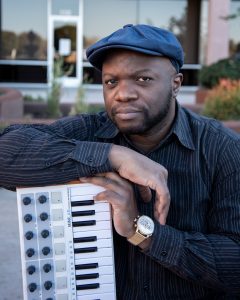 “This is a song of solidarity and a prayer for Ukraine. They are in a horrible war right now.
It is a very bad situation for everyone involved. Several have lost their lives as a result of this senseless conflict. Many don’t even know if they’ll be around this time tomorrow.
I believe there is still hope. That is the idea of the song, to send heart-felt prayers, to give hope love, and support to the good people of Ukraine.”

Phill C- A Journey In Music

Phill C’s Musical journey started at the age of six in a second grade class at St Francis Middle School Caterham, London where he was first introduced to the glockenspiel and the Xylophone. He was bought a professional glockenspiel set, which he played in front of large audiences at an early age. This inspired him further and he began to compose tunes and practice more. In a few years he began playing the piano learning from a friend. All this gradually built his dream of being a great musician, performer and composer, but there was no mentor nearby. Gradually in his early teens he began to learn more about music in high school and studied recorder and piano. A break came when at 17 he was invited to a keyboard workshop. Within a period of 3 months, he had started playing in church services and in 2 Years he had been schooled in several areas of music with particular reference to the piano and keyboard instruments.

He played for a number of gospel groups and began to study gospel, accapella, blues and jazz, going to libraries reading the history of jazz. He studied about the eras of jazz, improvisation, position, and other rudiments of jazz referring to all the recommended discography. He gradually began playing jazz and at the same time studying grade 6 piano and building up confidence.

The Fan Page From Phill C