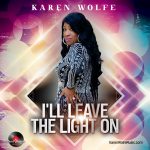 “I’ll Leave The Light On”

While the song title is self-explanatory, there is a thought process behind it, and that’s simple from my, or should I say a woman’s point of view. Though I talk a lot of smack to my songs, they all tell a story & have morals to them, and the moral to this story I’LL LEAVE THE LIGHT ON IS! I don’t need him to pay my bills, I can pay my own bills but what will he bring to the table in this Relationship/Hook up? I’m giving 100 percent while he’s gives nothing won’t work for me. I have dinner ready when he gets there, his bath water ran, take him lunch to work, do his Laundry, make sure all his needs are met. Now he could do those same things in return, but when will he have time as a working man? So, the least he could do is pay a bill, preferably the light bill, so that it’ll be easier for me to Leave The Light On for him. Now Motel 6 slogan is, they’ll leave the light on for you so that you can find your way around the place but, you can’t get into the Motel without paying right? So that’s my thought process for any Man who wants all his needs for filled & don’t feel like he should give anything in return. Now don’t call me a gold digger because I once not have known hi so who do you think was paying the light bill? Yep me. I can take care of my own bills, but if all I’m asking him to bring to the table is light bill money, I would call that a pretty sweet deal! Why? While I’m cooking, cleaning, dropping off lunch daily, Sexing, etc. & yes, those things cost money! He doesn’t even have to break a sweat going in his pocket & passing the dollars! Now if he can at least bring that to the table guess what! “I’LL LEAVE THE LIGHT ON” LIKE MOTEL 6!

The Followers Page For Tique