NEW SINGLE “CHANGES” THE FIRST SOUNDTRACK FROM “JIMMY AND THE BRITISH INVASION”.

A catchy, fresh and dynamic Rock’n’Roll song, reminiscent of the early 1960s. Released on October 30th, 2021 “Changes” is the title song of “Jimmy and the British Invasion”, a new film with an original soundtrack and screenplay written by Allison Hazan. 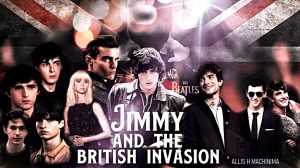