There’s an old saying in the Army, ‘Never volunteer for anything’. It has been said many times, so why on Earth did Steven Carter ignore it?After volunteering for the Army Commandos, Carter finds himself cut off in enemy occupied Norway. It’s winter, it’s cold and the enemy are hunting for him. Can he survive against all these odds? Even if the Germans don’t capture him, can he find a way back to England?This novel is based on several true life events. It is based on the experiences of real people; real heroes.

If you want to read about people who would sacrifice themselves so that others can sleep safe at night, Operation Absolom, the first book in the Carter’s Commandos series, is just the one for you. 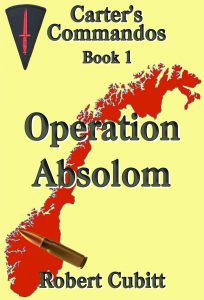